As I trained Wildlife Biologist, having worked for the US Fish and Wildlife Service and having taught Wildlife Ecology in the past I can speak firsthand about the ecological aspects of a pond. Pond Ecology is a bit complex but can be fairly easy to understand if we examine a pond from a "Food Chain" perspective. Let us begin with a definition of a food chain from Wikipedia:

"A food chain is somewhat a linear sequence of links in a food web starting from a trophic species that eats no other species in the web and ends at a trophic species that is eaten by no other species in the web. A food chain differs from a food web, because the complex polyphagous network of feeding relations are aggregated into trophic species and the chain only follows linear monophagous pathways. A common metric used to quantify food web trophic structure is food chain length. In its simplest form, the length of a chain is the number of links between a trophic consumer and the base of the web and the mean chain length of an entire web is the arithmetic average of the lengths of all chains in a food web."

The first stage of the pond food chain involves the microorganism of algae, plankton, and microscopic plants within the pond. The second stage of the food chain includes Insects in adult form, earthworms and assorted juvenile and larval forms of insects like Dragon Fly larvae and even young tadpoles and fish fry. These pond inhabitants feed upon the first level of the food chain and become food for the next level above them in the pond. The third level of the pond food chain consists of the many vertebrates species such as the frogs, turtles and fish species in the pond. These inhabitants feed upon the species present in the second level of the food chain along with plant material. A fourth level of the ecosystem does exist and consists of predators of your pond's inhabitants such as raccoons and Great Blue Herons. We do not encounter these often but they are occasional visitors to our ponds and we offer netting to our customers and Heron decoys along with Scarecrow devices to deter these predators.

While man-made ponds and natural ponds share many similarities such as the inhabitants (plant and animal) nutrient cycling and overall appearance, they differ in their ability to cycle nutrients annually and buffer changes in water quality due to loading of various nutrients. One similarity between all ponds is the presence of Algae and there are several types of Algae.

While it is not our intent here to begin a discussion on each species known to inhabit a pond across many geographies, we wish to point out the two most common forms of algae. The first major grouping of algae we call String Algae and they form mats of string and the second group include those that are microscopic or planktonic in nature and form a Pea Green Soup effect in the pond and can virtually eliminate all visibility to the lower depths of a pond. These algae outbreaks are a chief cause of imbalance in the pond ecology and food chain and we will address these shortly.

In addition to food which the pond inhabitants feed upon, they also rely upon Oxygen to undergo all of life's metabolic processes. The presence of such heavy algae populations in a pond sucks much of the available oxygen out of the pond's water supply.

The Oxygen and Carbon Dioxide Balance and role of Temperature

We all know that plants give off oxygen and that we consume that oxygen. Fish are no different, they also take in oxygen from their gills. Most are unaware however, that at night while photosynthesis has shut down, the reverse of photosynthesis occurs and that means that Carbon Dioxide is released into the pond. Algae and aquatic plants thus elevate oxygen levels near the pond surface during daylight hours. Respiration may be thought of as the reverse process, using up glucose and oxygen, and producing carbon dioxide and water. All organisms respire, and oxygen levels thus drop at night, particularly in highly productive ponds with high densities of organisms. Bacterial decomposition of dead organic material in particular is a major cause of high respiration rates. Because light is rapidly depleted with depth in some ponds, photosynthesis is less important than respiration in deeper water, causing a decline in oxygen near the bottom. Organisms living on or in the bottom sediments are thus exposed to very low oxygen levels. Many species may find deeper areas of the pond uninhabitable under these conditions.

This is thus very important for the pond caretaker to be aware of. While the graph does not show Carbon Dioxide levels on the graph, they are highest at early morning conditions until oxygen levels rise and the daily cycle reverses. As the season progresses and Spring moves toward Summer many pond owners are seeing heavier concentrations of algae populations and often treating them aggressively. This aggressive treatment may control the algae but can cause pond problems in the form of fish kills. This happens due to the degradation process of algae dying off and consuming the oxygen in the pond during its decomposition. It is for this reason that we advocate algae control early in the spring. However we take a very sustainable approach and suggest aggressive treatment of each pond with the Biological Beneficial Bacteria and enzymes which convert fish waste (Ammonia) into Nitrite and Nitrate and thus eliminate the source of food for the algae. This is treating the problem at the source and is quite a progressive strategy rather than reactionary.

The reason we study this aspect of Pond Ecology is to arrive at strategies to control algae. We are aware of annual cycles in ponds which experience the annual "Turning Over" like a lake but only on a smaller level. The cause of the turning over of the lake, which is a natural process aiding in nutrient cycling, is due to thermal stratification of the lake. Thermal stratification occurs when the warmer weather arrives, water levels in the pond begin to warm at the surface and eventually reach the lower levels of the pond. When the water temperature reaches near 60 degrees F most denitrifying bacteria (Heterotrophic beneficial bacteria) will begin to multiply and cycle the ammonia from the fish waste. Until this time it is very likely that most algae in a pond have begun to get a head start on the bacteria. It is for this reason that we recommend an aggressive treatment of bacteria early in the spring to "Seed" the pond with these bacteria types to be ready when ammonia levels will rise early in spring due to more active fish feeding.

See the diagram below for a brief overview of the Nitrogen Cycle.

Other Chemical and Nutrient Concerns

Aquatic microbes and fungi that are largely found in the muddy bottom of ponds, where dead plants and animals can accumulate, can cause unwanted pollution. Decomposition can occur rapidly; therefore, allowing pathogenic (disease causing) organisms to rapidly increase in your microclimate called a water garden.

The amount of oxygen released into the pond also depends on the water temperature (cold water retains more oxygen), the movement of water, and the quantity of decomposing material, which will decrease the oxygen levels related to decomposing substances that uses up the oxygen. For this reason, an added fountain or waterfall greatly increases the oxygen level in your pond. Decreasing the decomposed muck in the bottom of the pond also increases your oxygen levels. Both are extremely important in warm weather climates.

Plants and animals that die in water sink to the bottom. Extra food not eaten and fish excretion also ends up in the bottom of the pond. The decomposing of all these substances can lead to a toxic situation in your pond. Bacteria in the bottom convert these substances into nitrogen, which is released into the water. When nitrogen (N3) combines with the hydrogen molecule (H) in water, it forms ammonia (NH3). Ammonia can help your plants grow, but too much ammonia is detrimental to your pond. The ammonia replace the oxygen content; therefore, causing plants and animals to perish.

Snails are very important to this cycle of pond life, because they feed upon the dead organisms and prevent the production of ammonia. Snails have a very high tolerance for ammonia. When they start to die, this is a grave marker of the toxic intensity of ammonia in your pond (they are on the bottom where the ammonia levels are highest).

Nitrogen and phosphorus enters the pond through water changes and decomposition. This is the basis of limiting the amount of fish food to only what the fish will eat in five to ten minutes, and adding water in small increments.

Light affects these microbes by increasing the process of photosynthesis. During this process, food the sunlight is converted to energy by utilizing chlorophyll, which is the "green" in plants. This stored energy is needed for animals and plants to survive.

Temperature doesn't affect plants as much as it does the animals of our microclimate. Any change in temperature also changes the amount of elements in your water, especially oxygen. With an enormous change in temperature, fish and snails that are affected by the change, seek stabilization by moving to the bottom of the pond. Most freshwater fish can adapt to extremes such as freezing in the winter and scorching temps in the desert heat without great distress. Tropical fish and plants have a much harder time, and must be protected from immense variations in surroundings.

Relationship Between pH and Temperature

The amount of oxygen, hydrogen, nitrogen, and phosphorus in a pond also is the controlling mechanisms of the pH level of the pond. The pH level should range from 7.0 to 8.0 to reduce the production of algae. It can be measured easily with simple test kits. In fact, I use the same pH kit for my pond and pool. NEVER empty the testing water back into the pond. Levels should be checked once a month. I always check mine a few days after my once a month fertilizing of plants.

The pH problems can be treated with home "solutions" of baking soda or vinegar, or by using commercially produced pH modifiers. For a pH lower then 7.0 used 1/2 cup of dissolved baking soda to every 1000 gallons. Using 1 cup of white vinegar for every 1000 gallons can modify a pH higher an 8.0. After adjusting the pH, test the next day at the same time, since pH levels will fluctuate during day and night time hours. The most appropriate time to check levels is mid-morning.

Ponderiffic owner Ed Brown has been involved in the landscape industry for over 20 yrs with experience in horticulture, wildlife biology, water gardening and mechanical contracting. Current credentials and affiliations are provided below. 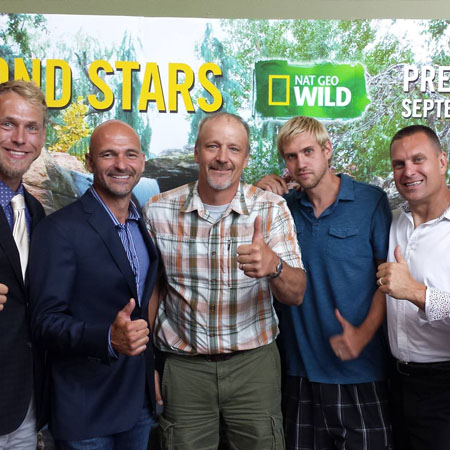 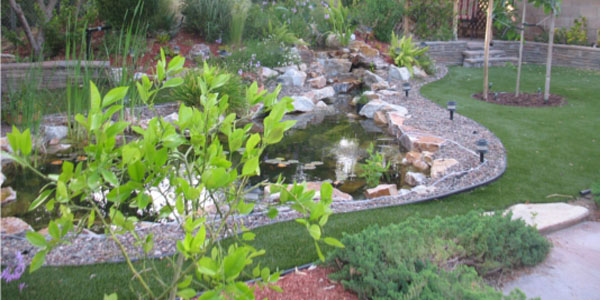 Ponderiffc provide's beautiful, and unique landscape designs for your home or business! 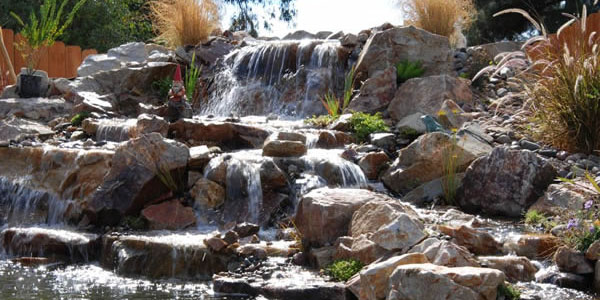 Ponderiffic Ponds & Waterfalls create a relaxing backyard oasis you have always dreamed of! 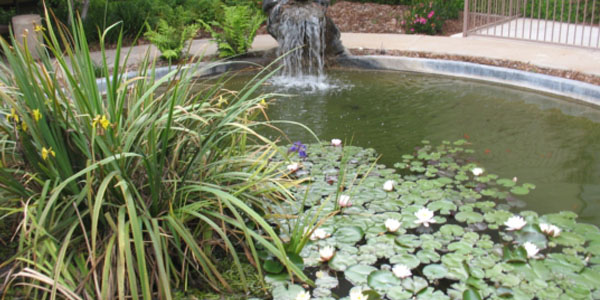 Find out the about a ponds ecosystem and what is required for the upkeep of that ecosystem.